What is Connecting in Chaos (CIC)?

Connecting in Chaos is a table read program designed to foster relationships between writers, actors, and the wider Spokane Film Project community. Created by Rececca Cook and actualized by Jennifer Gatts during the first surge of lockdowns during the pandemic, this program offered much-needed artistic engagement and a community outlet for creativity. During our heyday, we set up table reads for up to four scripts each month.

Now, at the request of our membership, CIC is returning to once again provide writers with the vital opportunity to see their work performed by the region's most talented actors.

Table reads are an essential part of the initial writing process, as they reveal to the writer what may be working in their scripts, and what needs improvement. Having one's work read is often one of the highest prizes a writer can win at a film festival.

These reads are also a wonderful opportunity for actors to get their names out there, to gain practice in reading different roles, and to meet collaborative partners. At least three projects from CIC have been fully produced, with actors who originated the roles during a table read playing the part when the piece was produced.

However, whether a script is produced, sold, or goes back to the revision process, what's important is the fact that we came together as a community to express ourselves during difficult times, and to provide our love, talent. and ability to one another. We truly choose to connect in chaos.

As long as we have enough material and actors to fill roles, our goal is to conduct a table read every other week. For the safety of everyone involved, table reads will be conducted via the Zoom platform for now. Once the pandemic is behind us, we look forward to conducting future table reads in person.

HAVE A SCRIPT YOU WOULD LIKE TO HAVE READ?

WANT TO BE A PARTICIPANT IN A TABLE READ?

YOU WERE SELECTED AS A READER… NOW WHAT?

HAVE A SCRIPT YOU WOULD LIKE TO HAVE READ?

Thank you for your interest in Connecting in Chaos. We are looking for a variety of scripts in both content as well as length. CIC requests both full-length and short script submissions for variety and practicality. Our team will work to ensure it is an educational and fun experience for scriptwriters. Please have the following three things ready to attach to the online form submission:

We ask that you use the below sample (or similar) format to assist our team in making sure the process goes smoothly. This standard format allows any team member the ability to be familiar with the layout when they review your submission. As a scriptwriter this format also assists you into looking deeper into your screenplay. 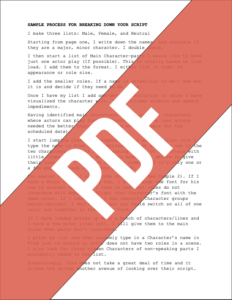 The team will do it’s best to match up your characters with the current roster of volunteer actors but we are limited by who volunteers for a particular session.

We are currently not allowing any recording of the events.

We reserve the right to decline any content that violates SFP's Code of Conduct. View the code of Conduct here.

If you have any questions, please feel free to contact us at: CIC@spokanefilmproject.com. A member of our team will get back to you within 48 hours. Thank you.

WANT TO BE A PARTICIPANT IN A TABLE READ?

We invite all SFP members to read for a table read! You do not have to have experience as an actor, just the desire to read a script with other people via zoom! Don’t get us wrong… this is a fantastic way to sharpen your skills if you are an actor! It is a great way to explore and take on the “role” of different characters.

We are looking for all ages and all types of people. If you are interested, please complete the form below. We are not “casting” these table reads. All roles will be assigned on a first come, first served basis. All members are welcome.

Click the form below to register for our next table read!

YOU WERE SELECTED AS A READER… NOW WHAT?

We request that actors have access to a quiet, secluded space during the table read. A good microphone is a must. If possible, please log in via your laptop in order to see and engage with the other participants and read along on your screen. We ask that all participants are able to have their cameras on, in particular when they are in the scene being read. Try to log in at least ten minutes early, as "zoom problems" are the primary culprit for readings starting late. Although situations arise, we request that if you must cancel, you do so with at least 48 hours of advance notice.